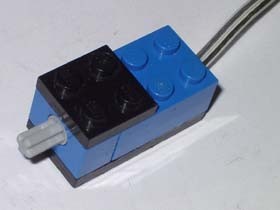 June 2004: A LEGO rotation sensor for RCX is not so easy to find, and not at all cheap. In many cases it’s not the best way to control the absolute position of a part of a robot, such as legs, arms or other moving parts. So I came up with this LEGO angle sensor, after having visited many web pages, including Michael Gasperi’s page. Since I’m an electronic geek since I was 12, I had in my electronic workbench some tiny variable resistors taken from an old VCR. 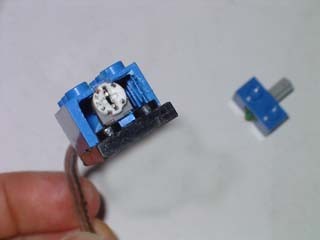 It was a hard work to fit things in there, mostly to couple mechanically that sweet Technic grey pin (that’s the really good looking shaft of the sensor)to the small head of the trimmer. 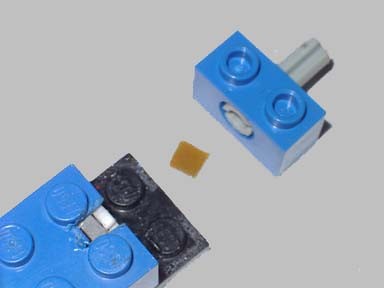 I solved the problem using a square part of a PCB (bachelite board for electronics). The pin allows perfect compatibility with other LEGO elements, and it does not come out if you try to pull it (for example, to remove a gear), because the PCB square blocks it. The pin, coupled with trimmer, can swing about 270 degrees. The schematic is shown below.