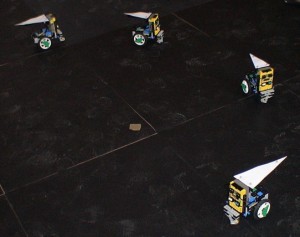 The four robots of the LEGO MINDSTORMS mobile robots team I built at the Department of Information Engineering of the University of Siena.

Abstract: The goal of this work is the realization of a mobile robots team using the LEGO MINDSTORMS RCX technology. The team is used to experimentally test a control law to achieve a collective motion, to achieve a specific configuration of the multi-robot system. At steady state, the robots must be on a circumference, and rotate around a beacon, trying to maintain a constant distance between themselves. The control law [Ceccarelli, PhD thesis, 2005] is conceived for a decentralized architecture, but is implemented on a supervisor computer that extracts the robots position using a camera mounted on the ceiling, and controls the robots by sending infrared signals (LEGO IR tower). The LEGO MINDSTORMS RCX support is adopted to validate the law on a low cost limited hardware. Using this support permits to build a team of robots with great flexibility in the design of the hardware. The low cost of each robot, with respect to commercially available mobile robots, is an advantage, in the perspective of building team composed by a large number of robots. The experiments were performed in the Mobile Robotics Lab, formerly located in via Pendola, Siena, Italy.

Abstract: The paper presents the results of experimental tests carried out to validate the performance of a decentralized control law, for the collective circular motion of a team of nonholonomic vehicles. The considered control strategy ensures global asymptotic stability in the single-vehicle case and local asymptotic stability in the multi-vehicle scenario. The main purpose of this work is to verify these theoretical properties in a real-world scenario. As a side contribution, a low-cost experimental setup is presented, based on the LEGO MINDSTORMS technology. The setup features good scalability, it is versatile enough to be adopted for the evaluation of different control strategies and it exhibits several issues to be faced in real-world applications.

Abstract: This paper presents the experimental validation of a recently proposed decentralized control law, for the collective circular motion of a team of nonholonomic vehicles about a virtual reference beacon. The considered control strategy ensures global asymptotic stability in the single-vehicle case and local asymptotic stability in the multi-vehicle scenario. The main contribution of this work is to evaluate the performance of the proposed algorithm in presence of a number of uncertainty sources naturally arising in a real-world environment. Both static and moving reference beacon are considered, in a low-cost experimental framework based on the LEGO MINDSTORMS technology. The adopted setup features good scalability and is versatile enough to be adopted for the evaluation of diﬀerent control strategies. At the same time, it represents a challenging testbed, exhibiting several issues that have to be faced in real-world applications.

Abstract: This thesis main contribution is a multi-robot SLAM algorithm for a team of mobile robots that have to build a 2D map of the environment with line segments, representing the feature uncertainty in the measurement subspace (M-Space) [Folkesson & al, 2007].

The M-Space feature representation allows one to specify the line segment feature location and extent (feature space), while expressing its uncertainty in a different space (measurement subspace), corresponding to the partial information provided by the robot sensors. The uncertainty is expressed in a frame attached to the features, so to avoid the lever-arm effect, i.e. the feature uncertainty dependency on the location of the feature itself. The SLAM problem is formulated as a state estimation problem, where the state is composed by the robot pose and the features parameters. The state estimation technique adopted to tackle this problem is the Extended Kalman Filter (EKF). Initially, the robots perform SLAM independently sensing the environment through a laser range ﬁnder, estimating their pose and map by using the EKF. When the robots meet, the independent maps are fused together using relative distance and bearing measurements [Zhou & al, 2006], thus making no assumption on the initial location of the robots. The estimation error covariances of the two maps are transformed accordingly. The map fusion procedure is described for the two-robot case, and can be extended to larger robot teams by repeating the procedure for each pair of robots. After the alignment, the enlarged maps are searched for duplicate features. These duplicates are used to impose constraints between the two maps via EKF updates, thus improving the map alignment quality. Each robot get a different version of the same merged map, that is used by the robots to continue performing single-robot SLAM, until they meet and share their information again.

I wish to thank my advisor Andrea Garulli and co-advisor Antonio Giannitrapani for their patience and support. Many thanks to John Folkesson for having helped me understanding the M-Space representation.

Abstract: This paper presents a multi-robot simultaneous localization and map building (SLAM) algorithm, suitable for environments which can be represented in terms of lines and segments. Linear features are described by adopting the recently introduced M-Space representation, which provides a unified framework for the parameterization of different kinds of features. The proposed solution to the cooperative SLAM problem is split into three phases. Initially, each robot solves the SLAM problem independently. When two robots meet, their local maps are merged together using robot-to-robot relative range and bearing measurements. Then, each robot starts over with the single-robot SLAM algorithm, by exploiting the merged map. The proposed map fusion technique is specifically tailored to the adopted feature representation, and takes into account explicitly the uncertainty affecting both the maps and the robot mutual measurements. Numerical simulations and experiments with a team composed of two robots performing SLAM in a real-world scenario, are presented to evaluate the effectiveness of the proposed approach.