The cutest robot in the classroom!

WALL-EV3 is shaped after Disney Pixar's WALL·E (Waste Allocation Load Lifter – Earth-Class), a fictional trash compactor robot left back on Earth to clean the planet from garbage, in a not-so-distant super-consumistic future.

WALL-EV3 is built out of a single LEGO MINDSTORMS Education EV3 set 45544.

WALL-EV3 has two triangular shaped treads driven by two EV3 Large Motors, and rotating head and arms driven by the EV3 Medium Motor. The EV3 gyro sensor allows the robot to drive perfectly straight, and turn precisely, even if the treads slip when travelling on uneven ground. It's easy to attach an EV3 Color Sensor looking down on the ground, to enable WALL-EV3 to follow a line. Thanks to the EV3 Ultrasonic Sensor, WALL-EV3 can navigate while avoiding obstacles, or can follow your hand. 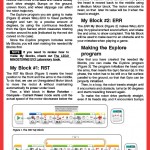 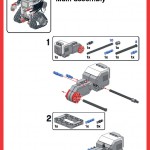 Wall-EV3, thanks to the Gyro Sensor, can drive perfectly straight and turn accurately, unlike normal wheeled robots. In fact, even if the two wheels of a differential drive mobile robot travel at the same (nominal) speed, the robot might drift left or right. This problem is due to light differences in motors, slipping of the wheels, uneveness of the ground, bumps, friction or external disturbances. For such a mobile robot, turning by an exact amount of degrees is even more difficult.

But not for WALL-EV3! The Gyro Sensor reading is used as a feedback for a proportional controller that outputs the steering command for the Move Block. So, if the robot drifts, the Gyro heading changes and the controller adjusts the steering in order to make the robot travel straight again.

Check out its outstanding performance in the video!

Wall-EV3 can play a simple number guessing arcade game. The rules are simple. In each turn, WALL-EV3 chooses a random number from 2 to 8, then it wait for you to guess if the next number will be higher or lower. You express the choice by pressing the right or the left button that are on his hands. Once you make you guess, WALL-EV3 shows the number he was thinking. If you are right, he cheers, and you get a point, otherwise he's disappointed and the life bar decreases. You can make 4 mistakes before the game is over. At that point, your final score is shown. Check out the video of LEGO WALL-E guessing game!