My LEGO BOOST version of WALL-E is shaped after Disney Pixar’s movie star WALL·E (Waste Allocation Load Lifter – Earth-Class), a fictional trash compactor robot left back on Earth to clean the planet from garbage, in a not-so-distant super-consumistic future. You can build this LEGO WALL-E  with a single LEGO BOOST Creative Toolbox set 17101. You will also need a smart device like a tablet or a smartphone to play with it.

LEGO BOOST WALL-E has two triangular shaped treads driven by the BOOST Move Hub internal embedded motors, and rotating head and arms driven by the LEGO BOOST External Motor. The LEGO BOOST sensor placed in the chest can detect colors and objects, allowing WALL-E to detect and avoid obstacles. You can also control WALL-E with a color cube and make it follow your hand. Have fun recording sound effect from the movie clips, and remote control your personal WALL-E to make it do whatever you want! Besides WALL-E, the building instructions allow you to create also a plant that LEGO WALL-E can hold in its articulated hands, a color cube to control its behavior, and its cockroach friend HAL. 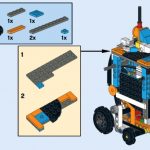 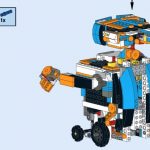 LEGO BOOST WALL-E is ready to go! The PDF you get contains the instructions to make a set of programs for the robot.
The quality of the building instructions is just like the LEGO official ones . The building steps are detailed and clear.
LEGO WALL-E can be built with the parts from the LEGO BOOST Creative Toolbox set 17101.
Each PDF comes stamped with your name and license, to ensure product authenticity

Take the chance, and get the instructions while on discount!

WALL-E robot built with LEGO BOOST (17101). It can move on its treads, swing head and arms.

In the act of buying, you accept the following terms:

Any infringment to the above terms is considered a punishable criminal offence.

Any cookies that may not be particularly necessary for the website to function and is used specifically to collect user personal data via analytics, ads, other embedded contents are termed as non-necessary cookies. It is mandatory to procure user consent prior to running these cookies on your website.

This popup will close in: