For the next fair, invest in an irresistible showpiece and stand out from the crowd of competitors

Attending a trade show can be very expensive. Especially for companies that produce software, it is difficult to capture the attention of potential customers and then communicate the value of their work to them through the usual cold simulation on a TV screen. There is nothing worse than spending money and then being ignored because your stand is anonymous, boring, like many others.
But how to do it? There is a way, even if it seems absurd.
Read on, my story is unbelievable, and revolves around a programmable LEGO brick.

How my LEGO industrial model upstaged the real machines

I’ll tell you a true story. In 2010, I was working as an engineer in the R&D department of a company that creates integrated solutions for automated warehouse logistics. We had to participate to INTERPACK, the most important trade and packaging fair and like every time, the company would have spent a lot of money on the set-up of the stand: robotic palletizing cells, huge automatic forklifts, food and wine, dancers/singers and other amenities.

I proposed to the CEO and the head of marketing to design and build a scale LEGO model of a small working warehouse logistics cycle, with a 4DOF anthropomorphic robot that would pick and place colored balls by dividing them by color into various gravity racks, and an automatic line following forklift (AGV) that would move the balls from the end to the beginning of the loop.

The boss was enthusiastic about it, those of marketing and sales was like: “Real machines will sell, not toys! To attract the public, we already have the singers!”

However, I was allowed a month away from the usual R&D job to develop this scale plant using LEGO pieces, LEGO Technic, LEGO MINDSTORMS components and other servomotors. This is the video I shot in the office at the end of the test before packing the model and sending it to the fair.

At the fair the LEGO warehouse was a outstanding success!

The audience flocked to watch with curiosity my LEGO prototype at work, ignoring the massive real machines (and the singers) that were just a few meters away!

It was embarrassing, because the marketing people were definitely annoyed by the unexpected success that my LEGO model was enjoying, which a few weeks earlier they did not hesitated to call a “toy”. Eventually, they came to recommend that I invite my audience to talk to them about closing any business deals. One of the company’s salespeople even proposed to become my agent! Incredible, but true.

It was this extremely positive experience that gave me the idea and the upsurge to start my own business to create automatic LEGO models on commission for all companies: hardware manufacturers or software developers.

For testing, simulations, marketing and promotion of your company at trade fairs or events, we create truly functional custom-made LEGO models that reproduce all kinds of industrial processes on a small scale: warehouse logistics, assembly of objects, painting, baking , stamping of metal parts. The models are working for real! The LEGO reproductions of real machines can work in stand-alone mode (fire and forget), or integrated and interfaced with your proprietary management software. Exhibiting your product made with LEGO at the fair could make a difference! We are not talking about large static LEGO sculptures, but working reproductions of real industrial plants made with LEGO.

A LEGO prototype to the rescue

This LEGO robotic cell model features a palletizer robot arm that can perform pick and place operations. The 4-DOF (degrees of freedom) anthropomorphic robot arm picks boxes coming from a gravity rack and places them orderly on a pallet. The gravity rack can be easily replaced with a conveyor belt. The boxes are designed in such a way that they self-align when stacked onto each other and onto the pallet, to accommodate for small positioning errors, increasing the overall reliability of the system.

The brick-built boxes can have different colors to represent various products. At the end of the gravity rack there’s a sensor that detects the color so that the LEGO palletizer robot can sort the boxes. This LEGO robot arm works as a stand-alone module, but can be put in a larger setup, together with other modules such as a conveyor belt, an Automatic Guided Vehicle (AGV) or a vertical warehouse to simulate a bigger logistic system. This LEGO prototype is ideal to demonstrate a WMS or to generate data for an Industry 4.0 application. 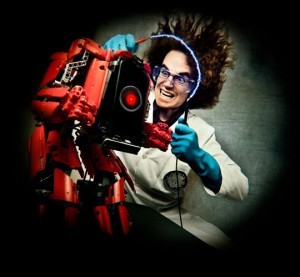 My name is Daniele Benedettelli, I am a robotics engineer, known worldwide for his LEGO® MINDSTORMS® robotics creations. My Youtube channel counts more than 8 million views, and my robots have been demonstrated in several events and conferences, shown in TV shows (including RAI, SAT.1, National Geographic) all over the world since 2007. From 2006 to 2012 I collaborated with The LEGO Company as consultant and programmer to develop the LEGO MINDSTORMS NXT EV3 products for educational robotics.

The past experiences as teacher and speaker include:

I wrote five books on educational robotics. My LEGO portfolio includes autonomous robots, control systems, AI-enabled unsupervised learning robots, industrial plants models; LEGO RUBIK UTOPIA, the first LEGO MINDSTORMS robot that could solve a 3×3 Rubik’s cube in less than a minute (2007); LEGONARDO, an half-bust automaton that can draw live portraits (2009); Cyclops, a complex robot that can walk, gesticulate, talk, act, understand speech and interact with people, remote controllable using an upper-body LEGO exoskeleton (2011); Duck Maker, a duck robot that can replicate itself, laying eggs containing ever-different chicks built with 6 LEGO bricks (2014). In 2018, I started building purely mechanical LEGO automata for fun: one can play a tune on a glockenspiel, and others can perform magic tricks, and even draw!