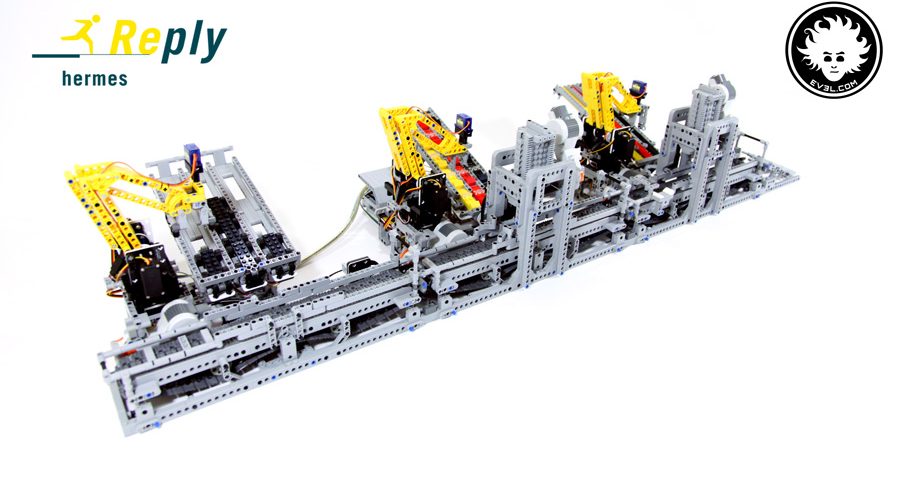 This is the second LEGO car factory I design. I developed it in the first half of 2016 and I completed it in June 2016. It is composed by three modules, and can assemble LEGO cars with selectable body and roof among three colors, thus creating 9 possible combinations. This industrial manufacturing model is controlled by a single board, to which the LEGO MINDSTORMS servomotors, R/C servos, and GROVE sensors are attached. The model communicates with a HMI (human-machine interface) developed by the client, Hermes Reply.

What is a pipeline?

Pipelining is a natural concept in everyday life, for example in an assembly line like this. Consider the assembly of a car: in the first module, the robot arm picks and places one of the chassis on the conveyor, then the body is installed and finally the roof. A car on the assembly line can have only one of the three steps done at once:

After the car has its chassis placed on the conveyor, it moves on to the next module to get its roof installed, leaving the chassis  module available for the next car. The first car then moves on to roof installation module, the second car to body installation, and a third car begins to have its roof installed. If the factory could build only one car at a time, it would take about 1 minute to build each car. By using the pipeline, the factory outputs subsequent cars every 30 seconds, after the first car is assembled.