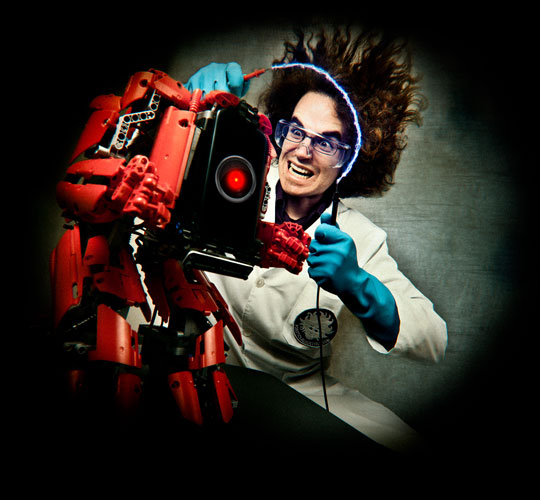 May 2011: Cyclops Prototype was the first version that could walk and talk. It used four Actuonix linear actuators (LA) and two NXT motors. The walking performance was poor, and the LA plastic attachments cracked under the weight of this beast. I recommend to not use Firgelli LA’s for intensive duties, use them only if you need extremely precise linear motion for light applications. The robot arms did not move at all. This version was never shown in public, but you can catch some glimpse of it in the teaser videos for WRO 2011 and for Robolympics 2012.

The robot already featured an Android-powered smartphone, with a custom written app that provided Cyclops with an innovative User Interface, allowing it to follow people faces with its eye, speak in English, and sending commands the NXT lower level NXT program via Bluetooth.

October 2011: Cyclops mk I is derived from mark 0. The long LAs and NXT motors were replaced by R/C servo motors, controlled by a MINDSENSORS NXT Servo device, so it could walk using 6 motors, and gesticulate using 4 motors. Cyclops mark 1 was completed to be shown at Abu Dhabi, during World Robot Olympiad in November 2011. I also showed this robot in various Universities throughout the Gulf Countries. The Android app was refined: the robot could detect faces, talk, understand vocal commands, and even act. For the last purpose, I invented a simple scripting meta-language: writing a script is easy and can be done directly using a text editor on the smartphone. I made one official video for WRO 2011, but on Youtube  there are also some unofficial videos made by fans.

May 2012: Cyclops mk II is redesigned from scratch, after suggestions by a comic designer. He came and said “It looks like a box with legs and arms! Why don’t you make it posing like an hero?” And he sketched something on paper.

The robot now looks much more humanoid, walks with 3 NXT servo motors, that are much more robust than LAs and R/C servos. It walks and turns by shifting the NXT, (moved back as a jetpack) and rotating the knees keeping the feet parallel to ground. Legs are finally straight, no more chicken-like. The arms and hands are actuated by 8 R/C servos.

In addition to the old functionalities, it can be completely remote controlled with a telemetry suit, a wearable remote control in the form of an exoskeleton. I will make a documentary video of all Cyclops features, time permitting.