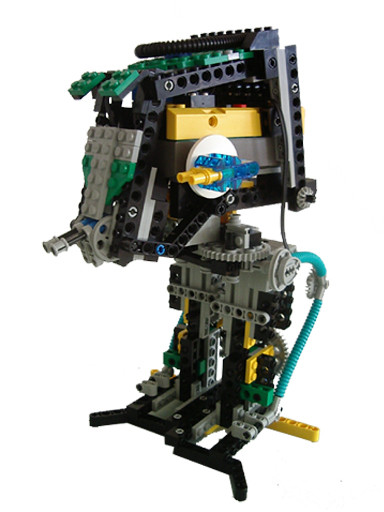 December 2004: This is a walker biped, shaped as the famous chicken walker of the Star Wars movies, the All Terrain – Scout Transport (AT-ST). It can walk straight and turn on its own footprints. The mechanism is similar to the APU one, but it is emproved and smoother. I tried to render aesthetic details at best with few special parts I had. The robot is built only with Lego Mindstorms RIS 1.5 kit, plus one motor. On both legs the motors lean the robot, bending the knees. The cyan ribbed hoses give the illusion of the real shape of AT-ST legs, and allow more stability, working as springs. The laser guns act as a bumper: a touch sensor detect if they  hit something in front of the robot. Between the window panels on the front, I put a light sensor that, together with the RCX IR port, work as a proximity sensor, detecting objects without bumping; also, it can be used to track light sources.

[wpdm_file id=8] This material is distributed “as is”, with no obligations or technical support from the author.